When designing FPGAs, code quality is essential to staying on schedule, avoiding design iterations and worse, bugs found in production. This is especially true when it comes to high reliability applications such as automotive, space and medical devices where bugs can be extremely expensive or impossible to fix. But just what makes RTL (VHDL or SystemVerilog) quality code? The answer is, well, there isn’t just one thing that makes for quality code. It’s a combination of considerations from readability to architecture choices.

In Part 1 of this blog series, I focused on readable and maintainable RTL code, highlighting some best practices. Part 2 will now deep dive into Finite State Machine (FSM) architectures and coding guidelines. Finally, part 3 will focus on the challenges concerning multiple Clock Domains.

Before we focus on a specific architecture, let’s recap the different methods or protections we might use on our state machine and what we are protecting against. If a single-event upset (SEU, a radiation- induced change in the bit in one flip-flop) occurs in a state register, the FSM that contains the register could go into an erroneous state or could “hang,” by which is meant that the machine could remain in undefined states indefinitely or requiring a reset of the FSM as the only way to recover.

Obviously, in many applications, this is not acceptable or is completely impractical. We want the state machine to be able to either continue operating (tolerance) or detect a failure and fail safe (detection).

To ensure reliability of the state machine, the coding scheme for bits in the state register must satisfy the following criteria:

When it comes to tolerance there are two mechanisms we can use:

Both the TMR and Hamming three structures require considerable effort from the design engineer unless the structure can be implemented automatically by the synthesis tool.

When it comes to detection, the structures used are considerably simpler:

Hamming Two is the best compromise in terms of size, speed, and fault-tolerance and is preferred over both binary and one-hot state machine encoding for high reliability designs. Hamming Three encoding is the best fault-tolerant to single faults and, therefore, preferred when ultimate reliability is required in a critical application, however it is slower and larger than other implementations.

As mentioned earlier, for highly reliable FSMs, all possible states must be defined and there must be no possibility of a hang state.

Functional verification of an FPGA’s RTL requires a considerable simulation effort to achieve code coverage (branch, path, toggle, condition, expression etc.). To achieve a high level of coverage the simulation must test several boundary and corner cases to observe the behavior of the unit under test and ensure its correctness. This can lead to long simulation runs and significant delays between iterations when issues are detected. Of course, issues found in simulation can range from functional performance such as insufficient throughput to state machine deadlocks due to incorrect implementation during the coding process.

This is where static analysis tools such as the Visual Verification Suite from Blue Pearl Software can be wonderfully complementary to functional simulation and can help save considerable time and effort in the verification stage, when code coverage is being investigated.

Static analysis enables functional verification to be started with a much higher quality of code, reducing iterations late in the verification cycle. In addition, static analysis typically also runs in tens of seconds to minutes compared to long running simulations. The Visual Verification Suite provides an FSM viewer and reports that help pinpoint any issues, up front, as you code. 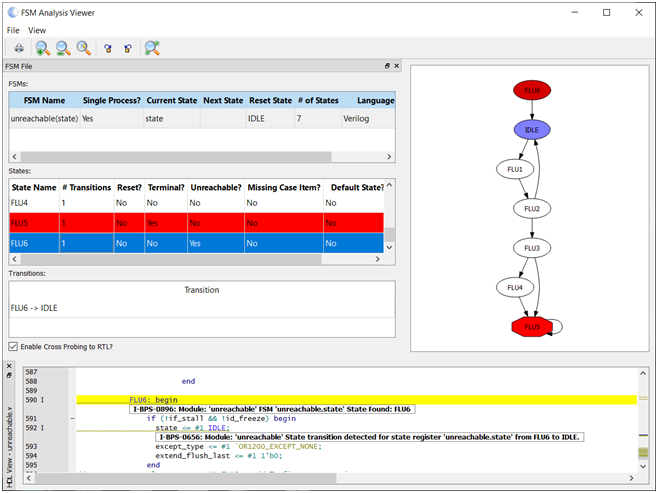 Many of the suite’s predefined rules focus upon the structural elements which may be incorrect in the design such as:

Visual Verification Suite, used early and often in the design process as opposed to as an end of design/sign-off only tool, significantly contributes to design security, efficiency, and quality, while minimizing chances of field vulnerabilities and failures.

To learn more about the Visual Verification suite, please request a demonstration, and check back for Part 3, the challenges around multiple Clock Domains.