State machines are at the heart of our designs. They enable us to implement sequential structures in a parallel programmable logic world. We use them to implement control structures and communication protocols, however complex state machines design can also significantly slow down our development due to the challenges associated in debugging issues, epically if only using simulation for verification.

Let’s look at some simple steps we can take when implementing state machines to reduce the number of potential issues introduced, along with how to analyze them using Blue Pearl’s Visual Verification™ Suite to accelerate debug before simulation.

When developing a state machine, it is good practice to ensure our design uses the following factors:

Once we have implemented our state machine design, the next stage is to integrate it within the larger design and then analyze the design using Visual Verification Suite.

Analyzing our state machines in Visual Verification Suite is very simple and performed as part of the load process. Before we load our design and perform the FSM analysis, we need to first configure the analysis.

If you are not familiar with implicit state machines, they are the state machines which are defined in a more traditionally software style consisting of loop, branches and wait states. 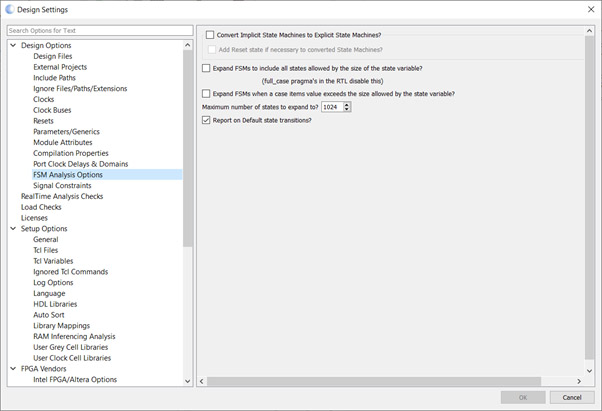 Once the FSM analysis is correctly configured, we can define further checks on the FSM under Load Checks. Here we can define which rules we wish to use to check our state machine, such as checking that the state machine is implemented using a single or two process structure as required by our design rules (FSM_USE_SINGLE_PROCESS and FSM_USE_TWO_STATE_VAR).

Terminal states can occur if unused state states are incorrectly addressed, or due to design error where a state is entered but the logic to exit that state is not implemented correctly.

With the options configured in line with the design standards, the design settings window can be closed and the design loaded, which runs the analysis. 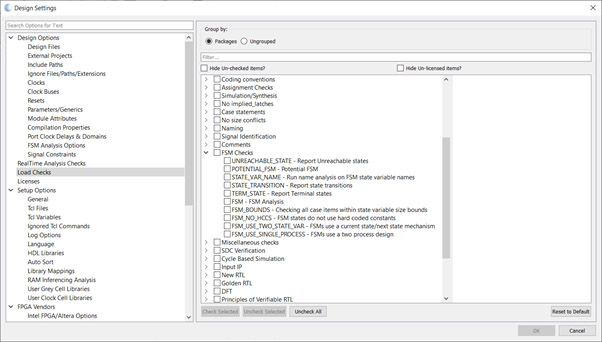 Once the design is loaded, we can view the FSM analysis results. These are available in both as messages in the results view, and graphically in the FSM Analysis View.

To demonstrate the capabilities of the FSM analysis we will use the unmapped state example, which can be found under the help menu. 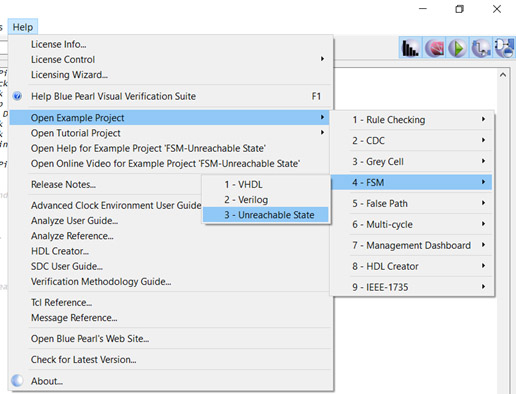 This will load in an example Verilog file which contains a state machine which has a design issue.

Before the design is loaded and analyzed, click on the design settings to see how the FSM analysis for this example is configured. 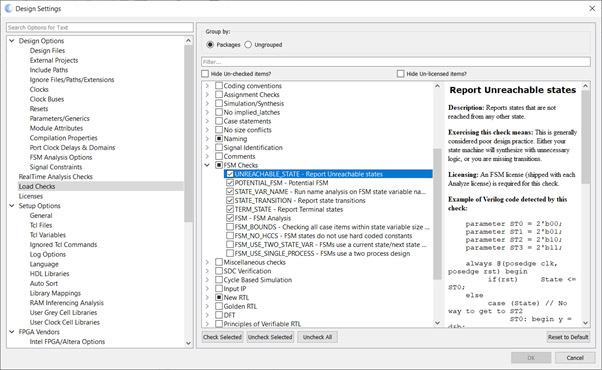 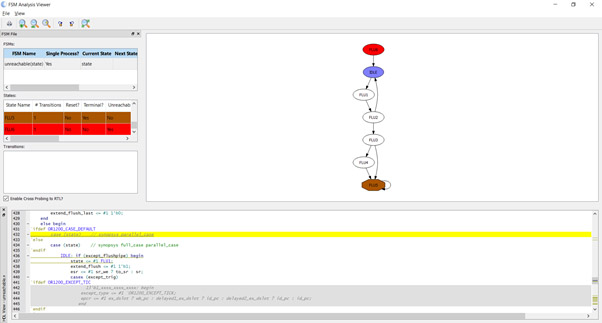 Looking at the FSM Analysis Viewer we will notice that this design has a terminal state for state five, which results in state six being unreachable. Both have colors (brown and red respectively) to show the states where issues exist.

Having identified this issue in the FSM Analysis Viewer we are then able to correct the RTL source to behave as intended.

This ability to enforce good design practice and analyze the FSM behavior quickly enables us to identify issues earlier in the RTL source code, which can save time in development process as issues are identified before simulation and synthesis.